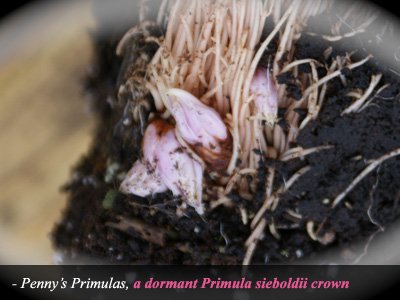 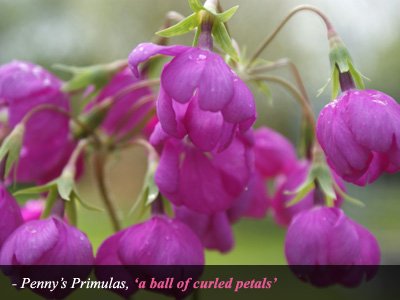 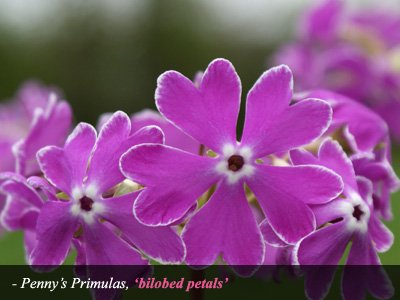 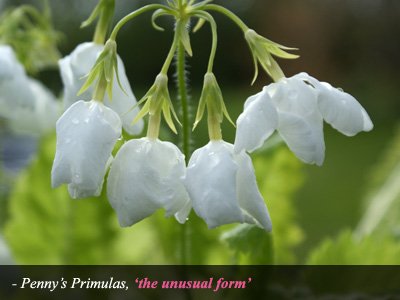 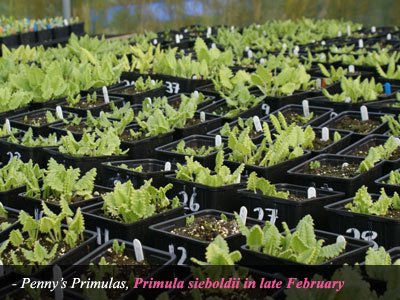 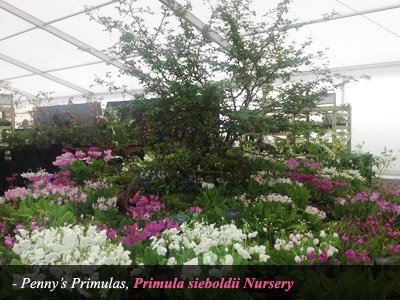 Primula sieboldii is known as the Sakurasoo, or Cherry Blossom primula. It’s distribution covers north-east Asia. It is a long-established favourite in Japan, described in the earliest known gardening books from there. It is a very variable flower in cultivation, but little is recorded of its variation in the wild.  Its habitat is generally in open woodland, grassy scrubland and moist free draining grasslands. Although it does not inhabit the high alpine meadows, the Primula sieboldii’s native distribution makes it fully hardy throughout Britain.

The Sakurasoo is a deciduous slow-clumping perennial. Its year starts in early February, when delicate looking pale green leaves emerge from shallow buried rhizomes, called crowns. The leaves are lozenge shaped, with rounded teeth edges and a faint covering of fine hairs. Flower stems rise up to 30cm from the loose crown of leaves. The buds open in a loose whorl, occasionally two whorls of up to 20 flowers. The flowering period for this primula is relatively long. The earliest cultivars flower in mid-March and the species will remain in flower until early June.

After flowering, the seed pods will develop and ripen around July/August. Some cultivars of Primula sieboldii produce good numbers of fertile seed, other cultivars tend not to produce viable seed.

The primula moves towards dormancy in early autumn, with the leaves dying back to leave narrow rhizomes buried shallow in the soil. It remains dormant through the autumn and winter.

The wild form of the Sakurasoo primula tends to be a flat, open faced, five petalled cherry-blossom flower. Petals are often bilobed. Petal edges range from smooth and rounded, through toothed cultivars to the deeply dissected ‘snowflake’ forms.  The colour range covers white, shades from pale to dark pink, sometimes with hints of blue. A small number of forms have blocks of green variegation in the flower.

Flower shape is also variable. The flat, open faced flower is regarded as the norm. However, some cultivars will show wavy petal form, whilst others could  have petals that curl inwards at the edges. Others may have floppy petals that curl in loosely.  Some distinctive forms have flowers that do not open fully, enclosed in a ball of curled petals, or by tightly twisted petals. Increasingly, semi-double flowered forms are becoming available.

Primula sieboldii is very hardy in the garden, when grown in the correct conditions. Like most primulas, the Sakurasoo does not like to get too much direct sun.  Most importantly, these primulas prefer a cool, free draining root run. Primula sieboldii is shallow rooted, with the narrow rhizomes lying just below the surface of the soil. It likes a good quality free-draining soil, rich in leaf mold.

When planting in the garden, aim for a position that provides:

– Shelter from the mid-day sun

– Cool root run, for example where other vegetation shades the soil in summer, or under the dappled shade of deciduous trees

– Free draining soil that does not dry out fully, but also does not waterlog, in all seasons.

You will be advised to make a note of where you have planted your Primula sieboldii, because they will disappear under-ground through the dormant phase.

Primula sieboldii will clump slowly; and may migrate small distances, as new crowns are formed along the roots. They should not need to be split. However, if you want to split or move them, this is best done in autumn, when the sieboldii is dormant. We have even heard of a forgetful gardener who hoed the area where he had planted Primula sieboldii, realised his mistake to his horror, but was then ‘rewarded’ in the next spring with a widely distributed collection of Primula sieboldii flowering happily.

Many forms of Primula sieboldii will also set viable seed.  The seedlings may be similar to the parent plant; or they may be quite variable.

Although we have Primula sieboldii growing happily in a variety of places all over our nursery, our collection is kept in pots.

Our collection of Sakurasoo primulas is grown in one litre pots.  We tend to sell our plants in 9 centimetre pots. Although they will grow happily in larger pots, the rhizomes of the Sakurasu Primula tend to migrate to the edge of the pots, leaving an unoccupied centre to the pot, where the soil can go sour if the plant is not re-potted regularly.

Feeding should be limited to addition of slow release fertiliser when the plants are re-potted; and a weak feed, once the flowering season has ended.

Primula sieboldii should be re-potted each year. It is best to re-pot them in mid-autumn, when the plants have gone dormant and before the new year’s growth begins to be visible on the rhizome.

The rhizomes are relatively easy to separate out. Look out also for tiny new crowns forming on the roots of the plant.

Handled carefully, these will form into new rhizomes in the new season’s growth. There often will not be much root attached to the rhizomes, but even when there is, we tend not to trim the roots.  Try to tease out the old year’s rhizome from the new, but not at the expense of damage to the crown.

Plant the crowns in a fresh soil mix. We use variations on the following mixture:

– 1:1 mixture of composted bark and leaf mold for the top dressing

Fill the pots to about ¾ full with the soil mix. Place three good sized Primula sieboldii crowns on top of the soil. Cover with a thin layer compost. Cover this with a layer of the composted bark and leaf mold mix and firm down gently, if required.  Water sparingly.

We keep our Primula sieboldii collection in an air-flow tunnel.  This keeps the rain out during the winter, but does not over-heat the primulas. Like many primulas, the Sakurasoo benefits from cold winters. However, they do not like to get too wet, especially when they are in pots.

We tend to water rarely through late autumn and winter; and start watering when the new leaves are showing through.

If you aim to keep your primulas in a greenhouse, remember to try to keep maximum airflow around them; and to keep a watch on rising temperatures, especially in early spring. If you intend to keep your Primula sieboldii in pots, outside through the winter, try to put them somewhere that provides shelter from the worst of the rain.

After re-potting Primula sieboldii, do not throw the waste soil from the pots away. It is inevitable that you will have missed some of the smaller crowns, or the newly forming ones. Spread the soil around the garden in sites where the Primula sieboldii is likely to be happy; and you are most likely to be rewarded with plants the next spring.

Primula sieboldii is promiscuous, so we have to work hard to make sure that the named cultivars remain ‘pure’ and is not infiltrated by seedlings. The best way to do this, whilst collecting potentially viable seed, is to cut off the flower stalks whilst the seed heads are green. These can then be dried out for planting, or planted as ‘green’ seed.

Like most primula, the sieboldii seed is best planted fresh, whether it is green or fully ripe. We scatter our seed in trays of standard seed compost. Germination can take some time; and is often delayed to the following spring. Again, the seed will benefit from a cold spell, so try not to shelter them.

Our collection of named Primula sieboldii can only be propagated by division of the crowns. The seedlings will not come true, even if they look very similar to the parent plant.